In 2018, Prime Minister Saad Hariri adopted IDEAS’ proposal to transform the historic cross-vault hall in Beirut’s Grand Serail into a technologically-empowered working environment, and entrusted the Business Environment and Innovation Unit at the Prime Minister’s Office to follow up on its creation. IDEAS was called upon to bring the Serail Creativity Hub to life. 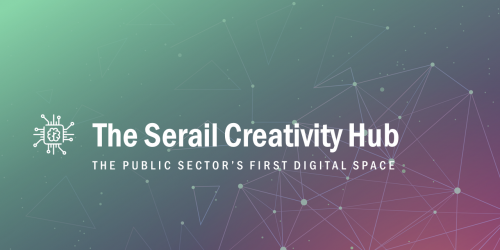 This once-forgotten cross-vault hall was used between 2018 and 2019 to host some of Lebanon’s most impactful conferences and events while awaiting the completion of funding rounds for the Serail Creativity Hub concept. IDEAS collaborated closely with the Presidency of the Council of Ministers on a series of events that posed as a prelude to the hub’s eventual functionality:

The Serail Creativity Hall is to be a digital oasis residing in the highest seat of Executive Government  – The Beirut Grand Serail. It is conceptualized to serve as the nation’s beacon for technological change and innovation it is an innovative, creative space embedded within the historical Ottoman-built 400-sqm setting which will preserve its original historical identity while functioning as an efficient, professional, digitally-enabled working space. The hub will serve as:

To move this vision forward, the Lebanese Government – the asset’s custodian and eventual operator – should be in office. Interim time was used by IDEAS to finalize preliminary planning and technology costing exercises, until new government formation occurred in January 2019. As a ground-breaking step, IDEAS organized a Design Competition across Lebanon’s Faculties of Architecture, thus involving Lebanon’s creative youth in the conceptual design challenge of embedding a multi-faceted technological space within a historical Ottoman setting. A total of 164 students within 24 teams participated in a 7-week competition run by IDEAS. The competition was carefully judged by subject-matter experts, and eventually voted upon by the Prime Minister himself. A LL 10 million award was presented to the winning team whose members will participate in the actual detailed design and execution of the Serail Creativity Hub.

IDEAS compiles first round of technology and construction offers for the Serail Creativity Hub, and submits a request for concept funding and operation to the Ministry of Telecommunications.

IDEAS Receives Approval for Partial Funding of the Hub

IDEAS receives first round of funding for the Serail Creativity Hub

H.E. PM Hariri re-affirms the transformation of the historical cross-vault hall in Beirut’s Grand Serail into a technologically empowered working environment. Announcement was made at the closing of the Summer of Innovation.

IDEAS receives the second round of funding for the Serail Creativity Hub.

IDEAS initiated action by involving Lebanese Architecture students in the conceptual design of the hub.

IDEAS welcomes 164 students at the Grand Serail to introduce the Design Competition criteria.

24 teams spent ample time taking measurements at the Grand Serail and posed their queries to subject-matter experts dedicated to this project.

Pre-Selection by the Technical Jury

11 out of the 24 submissions passed the Technical Jury’s test.

IDEAS grouped a multi-dictionary jury of 9 to select the most practically viable design:

IDEAS brought together the original Project Promoters and key stakeholders, alongside the developer of Lebanon’s first digital space, to vote using an online voting platform.

The Serail Creativity Hub is awaiting the securing of its full budget before launching the construction phase, all while IDEAS remains fully committed to all the programs running within and outside of the Serail's hub space, led by Bawabat Al Ibtikar.

Lebanese Academy of Fine Arts
Back